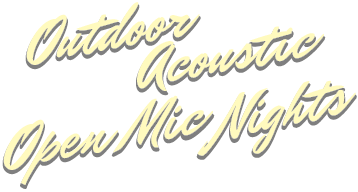 Our open mic nights are held in the DiBruno Bros. Piazza on the corner of 9th Street and Montrose Avenue.

Single song performance slots are given in the order of arrival and we hand out chord sheets for 2-3 all-skate songs to involve everyone.

There is a house band to accompany you if you wish, just bring leadsheets or chord sheets for them to use.

The use of the piazza is generously donated by DiBruno Bros. so please purchase your beverages/snacks from their Bottle Shop!

Finally, these events are free, however we request a pay-what-you-can Venmo donation to cover the cost of the house band. AN EVENING WITH EMMETT DRUEDING & FRIENDS

Emmett Drueding is a Philadelphia-based guitarist, singer and songwriter with an admiration for Chet Atkins, Nat King Cole, The Beatles, Elliott Smith, Dave Van Ronk and the greats of jazz and country blues. Drueding has spent years developing his distinctive guitar-centric sound that draws fluidly on these influences and others. In 2015, Drueding released his first solo EP, titled Strange Bruise to acclaim from WXPN’s The Key and popular british blog The Mad Mackerel. In 2017, under the moniker Sons of EL, he released Let’s Hook. And then in 2019 he released his first solo full length album in Tightrope Walker. His self titled release is due later this year, featuring songs he wrote and recorded in his home studio during the pandemic. On Drueding’s writing and performing style, indie music blog B-Sides and Badlands noted, “He might be playing a character . . . but his conviction is as ripe as grapes on a vine ready for harvest.”

This concert will be outside, weather-permitting, or if not, it will be inside our studio, mask-optional.   BYOB.

In The Meadow is a musical trio based in Philadelphia consisting of drums, percussion, bass, pedals, triggers, vibes, and of course… bird sounds. Their music grooves with an experimental twist that keeps the listener guessing and vibing. Join members Eric Proctor (that’s Mr. Eric to you MJM folks), Angelo Outlaw, and Brent Rickards for a show and go strolling through the meadow with them.

This concert will be outside, weather-permitting, or if not, it will be inside our studio, mask-optional.   BYOB.

(POSTPONED – new date to be determined)

$5/ticket (+ donate what you want at the event)